Norwegians are a scream, if you like fish jokes 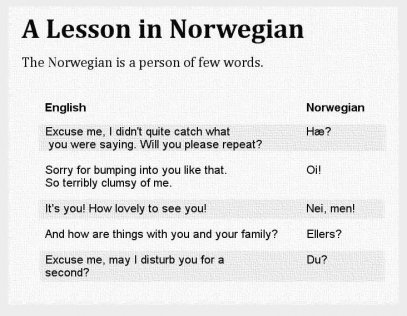 Most likely not. Despite all of the attention centered on the wintertime games in Lillehammer, Norwegian, the majority of the humor emerging in the Olympic games to date has already established related to either Tonya Harding or even the word "luge." The local fish has attracted more comedy attention compared to natives.

Granted, ethnic jokes aren't exactly in style nowadays, but it could also be the Norwegians themselves are members of the issue. In the end, any country whose cultural symbols would be the plays of Henrik Ibsen and Edvard Munch's "The Scream" is not exactly going to encounter like a laugh-riot.

The Norwegians appear to sense this. Based on news reviews, the Lillehammer Olympic Organizing Committee purchased 100Thousand "smile machines" for Olympic employees and townspeople, hoping undercutting the country's dour image. (Although the concept 1000's of appliance-caused smiles could be taken as evidence of Norway's deep-sitting jollity is fairly funny, if lTC you consider it).

It had not been always by doing this. There is a period when Norwegian jokes were enormously popular in Sweden, to this kind of extent that nearly every Swede understood a minimum of a couple of. For example, why do they never put ice in drinks in Norwegian? Since one guy understood the recipe - and that he died!

Then there is the main one concerning the Norwegian who came right into a music shop and started searching around. "Can One assist you to?Inch requested the Swedish clerk. "Why, yes, " clarified the Norwegian, "Let me purchase the red-colored trumpet and also the blue accordion." The clerk frowned. "I apologize, mister, " he told the Norwegian, "however the red-colored fire extinguisher isn't available, and I am afraid nowhere radiator is attached!"

Obviously, the Norwegians did not take this laying lower - they told Swedish jokes, which frequently seemed like Norwegian jokes using the ethnicities corrected. This "joke war" raged for pretty much ten years before dying out in early 1980s.

A Funny Norwegian Joke - The Priest & The Villager - LOL